This dogu, owned by Tokyo National Museum, was unearthed from the Kamikurokoma site, Yamanashi Prefecture. I think it is a marvelous dogu, in a sense, which has all of distinctive features of the Middle Jomon, and its motifs are eyes slanting upward and three fingers, of which patterns are drawn on the potteries of the Middle Jomon. Although it is said it is tattooed on the shoulders, if tattooed, it is a dogu without breasts. I don’t know if we can say it is male, but some people say it is male because of its brawny muscles. Another feature is its cleft lip, which shows very realistically a cleft shape. The same thing can be said not only on dogu of the Jomon period in Japan, but also on Haniwa of the Kofun period. It is one of the ways of presentation, which transcends the generations in Japan. Also, a pattern which looks like a snake is drawn on the back, and the bottom has been scrapped. Some people say this dogu has legs and was standing on a rest, however, I think it had better to understand the bottom was rubbed up. I observed that this is, in a sense, one of peculiar dogu among the attainments of the Jomon period. 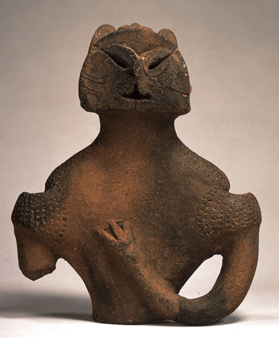 This is the dogu, which has become a national treasure for the first time. This dogu is of the Tanabatake site, as mentioned before, no pattern is drawn at all below the face as shown in a picture. Although a lozenge of sculpture is shown around hips only, all of patterns of this dogu is concentrated at the part where a “crown” is written. The patterns drawn are, naturally, like swirls or sculptured arrows, and its design is that very geometric patterns have been arranged if it is spread. As for this dogu, it is represented only by these patterns, and also, as you can see, it has no hands. Breasts are attached by slabs. And like the previous dogu, its eyes are slanting upward, and a nose is turned up with mouth open unconsciously. These are features of most dogu of the Middle Jomon period. And yet, this dogu has a head of heart shape, which is divided in both sides. This is a shape leading to the emergence of the succeeding heart shape dogu of Gohara mentioned earlier. Although the way of expression that the face to be a heart shape was established in the Middle Jomon, the most basic shape can be recognized by this dogu. We can say it is really a dogu, which represents the Middle Jomon period. 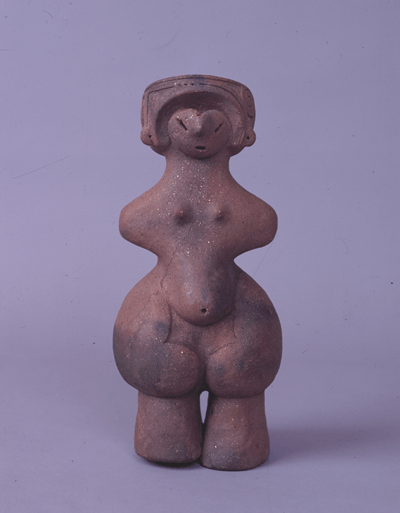 This dogu was unearthed from the Nishinomae site, Yamagata Prefecture. It is also called “Jomon Venus of Yamagata” like one of the Tanabatake site, however, the inside of the legs is a tubular type. And the upper body of this dogu is also produced like a slab and with protruding buttocks shape for steady standing. The dogu up to the Early Jomon period are basically of a slab type, which ends here. Underneath the slab, protruding buttocks and hollow legs are attached for steady standing. This does not express the face. No expression of the face might be also one of the methods, and this is it. Another feature is that this dogu also wears something like a crown as well as the one of the previous Tanabatake site. However, the crown of this dogu has no pattern. The patterns are drawn on parts below the trunk. In short, even they are of the same Middle Jomon period, they were produced perfectly limiting the portions for drawing patterns such as drawing on the crowns or drawing on the lower body. It is one of the features of the methods for drawing patterns in the Middle Jomon period. 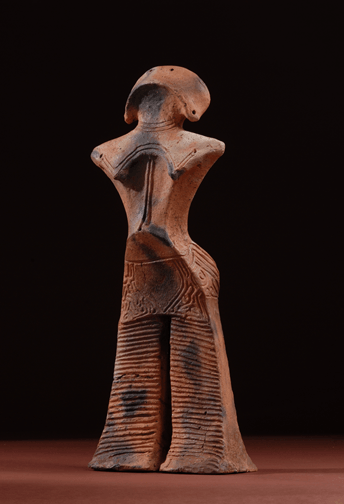 This is of the Late Jomon. It is the dogu, which has been said to be buried together or sleeping with the dead bodies which are said to be the masked dogu and Jomon Venus, as mentioned earlier. Its shape is an inverted triangle and no face is expressed. And patterns are drawn on the trunk. The patterns have been following exactly the ones of the Horinouchi 2 site of the former portion of the Late Jomon. One more, if looked from the front, the female genital organs have been clearly expressed. If the back is looked, there are two projections here. I suppose they are probably the male expressions corresponding to the female genital organs in the front. As for the spouted vessel of the Late Jomon, a figure like a Japanese letter “の” is often drawn in incised lines on the spout. At the same time, two clay balls are attached below the spout. In a word, the spout expresses male by attaching the two balls. By drawing a letter “の”, it expresses female. Such historical evidences occurred at the same period. Or on a spouted vessel, male and female are clearly identified. If this dogu is regarded as female on the front side and male on the back side, I think it is very possible that it is androgynous. It wears something like a mask right on the face. Therefore, it was formed without knowing the expression of the face. The inside of this dogu is also hollow. The entire body of this dogu is hollow. I estimate the pattern like a man who clings to his mother at the Middle Jomon has been represented on this dogu. 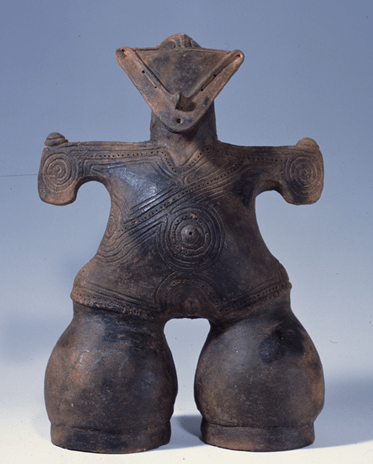 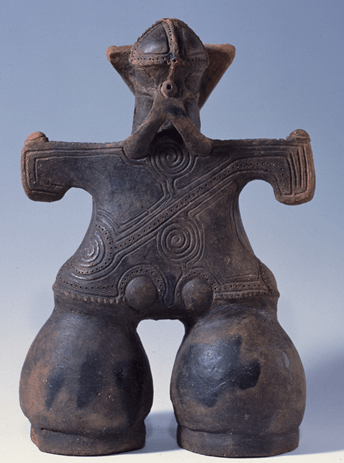